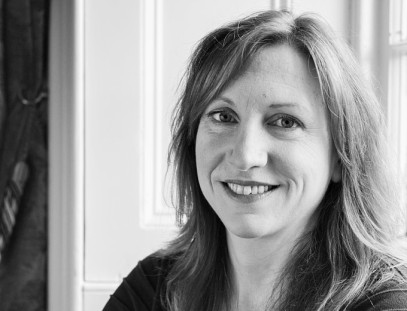 Striking and unusual, Polly Clark’s debut novel delves deep into one of the most isolating emotions we can feel: that of being a stranger. Two interwoven storylines unfold in the Scottish spa town of Helensburgh, eighty years apart, and spark unexpected connections between their two characters. One is Dora Fielding, a poet who has left her comfortable liberal world in London to move up north with her husband Kit. The other is also a poet: the young W.H. Auden, fresh from Oxford and trying to settle into a new career teaching at Larchfield boys’ school in Helensburgh.

Nothing in Dora’s life has prepared her for Helensburgh. To date, she’s occupied a world of books, where clever people argue passionately about ideas over drinks. Now, heavily pregnant, she moves with her older husband to this genteel, self-satisfied town, where net curtains twitch and everyone knows everyone else’s business. Their house, Paradise, should live up to its name: a mansion with a rolling garden running down to the sea. But the house was built in more prosperous days, for wealthy shipbuilders on the Clyde, and now it has come down in the world, partitioned up into two residences. The Fieldings occupy the lower floor, while their neighbours Mo and Terrence Divine live upstairs. And it doesn’t take long for Dora to realise that the Divines hate her: that she has unwittingly done something to antagonise them and that, as cherished members of the local church community, Helensburgh will take up arms in their defence. Friendless, lonely, trapped in a gloomy house with a new baby and hostile neighbours, Dora longs for an escape.

Wystan Auden is happy to take over as schoolmaster from his old friend Cecil Day-Lewis. He needs a little money to sustain his lifestyle and so, with his first book of poetry on the brink of publication by T.S. Eliot, he arrives in Helensburgh with a sense of optimism. That doesn’t last long, alas. Wystan finds the school shabby and poorly managed, and his colleagues largely unwelcoming, with the exception of the headmaster’s ailing wife Daphne. His debut on Helensburgh’s social scene is undermined by suspicions that he might be unpleasantly progressive, and Wystan himself is repelled by the prim, parochial complacency of the town. Stultified by his new life, he seeks diversion by injecting maverick humour into his lessons, by trying to write, and by yearning after a nameless young man he spotted by chance at the station. Helensburgh pales in every way that matters, especially when compared to Berlin, where Wystan’s lively friend Christopher Isherwood has made a comfortable home. But isn’t it possible to make one’s own happiness, no matter how unpromising the circumstances?

Clark is extremely good at evoking the slow, subtle creep of paranoia that comes with the feeling of being an outsider. Both her protagonists are highly sensitive people – that comes with the territory of being a poet – although they deal with their feelings of exclusion in different ways. Dora’s sections in particular were hugely moving, as we see her grappling with the major issue that faces modern mothers: how to retain any sense of identity when the yardstick with which you’ve measured yourself (wit, career, intelligent conversation) is sacrificed to the needs of a creature that is entirely dependent on you? It’s a ruthless, unflinching portrayal of impotence – of a need for reassurance and validation – and raises the question of how far we can trust Dora as a narrator.

I felt that Wystan’s sections were rather less engaging than Dora’s, simply because she seemed to jump off the page far more immediately. He is a gentler character, resigned rather than angered, and he’s interesting primarily because of who he is rather than what he does. Having said that, I’m inspired to actually seek out some of his poetry now, which previously I’ve only read in dribs and drabs. There was also one narrative device that I thought was a bit too pat to be entirely satisfying, although it’s true that this isn’t quite what it originally appears to be.

I can’t say more because I don’t want to ruin it, but I do recommend this for those who like their fiction thoughtful and emotionally intense. Clark is a poet herself and she is highly attuned to language: Dora’s tale is where the book really sings. As I read, I couldn’t help wondering what readers in Helensburgh would think of this – would they be delighted to see their town given such a starring role, or would they bristle at its characterisation? – and then, with a smile, I saw that Clark lives there herself. So I think, in the end, we must see it as a love letter to the place, the way it mingles untamed landscapes and tightly-reined niceties, and the way it stimulates those who have the courage to pry through the cracks.