A cautionary note before we start. Don’t watch this unless you’ve already seen At Five in the Afternoon. You need that context to understand the events of this remarkable documentary and to appreciate the results of the hard graft we see here. This isn’t just any ‘making-of’ film. Slightly longer than an hour, it records the efforts of a twenty-two-year-old female (Iranian) director to make the first full-length film in Afghanistan, barely a year after the fall of the Taliban. And it’s filmed on a handheld digital video camera by her fourteen-year-old sister. A tale of frustration, determination and lots and lots of shouting, it’s a testament to the sheer force of will that’s necessary to get a film made, and a fascinating glimpse behind the scenes.

The opening scene could almost be an excerpt from At Five in the Afternoon. A beautiful, impassioned young woman stands in front of a crowd of women, asking them why their country shouldn’t have a female President. But this isn’t scripted. It’s real life. Samira Makhmalbaf is the one asking the question and the Afghan women are both bemused and troubled. One indignant lady explains at length that the President should be the best, the wisest, figure in the country. Men are superior to women, so the wisest man should become President. How dare these strangers come into their midst and try to sully their daughters’ minds with such nonsense? Samira (there are so many Makhmalbafs in this film that I’m going to have to use first names) fights her corner, but we see her problem. 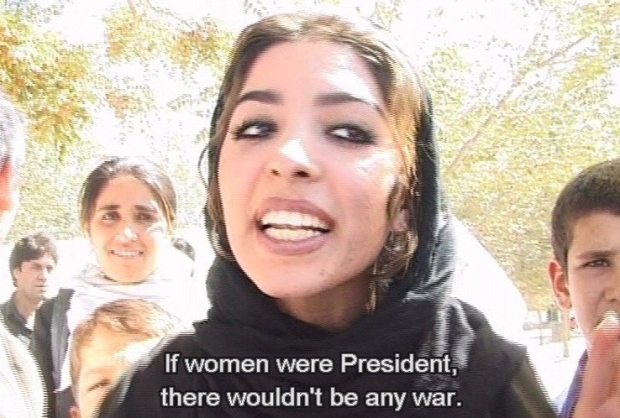 Loyally tailed by her camera-toting sister Hana, Samira attempts to cast her film. She knows the kind of story she wants and, for a while, it looks as if she might have found an actor to play the role of her heroine’s conservative father. She finds a white-bearded mullah who initially seems pleased to josh around with this spirited young woman and her gang of foreigners. But then things start to go wrong. He becomes unsettled by the idea that he’ll be filmed. He claims he never agreed to it (despite filmed evidence to the contrary); he resists Samira’s explanations that the film will never be screened in Afghanistan. A film is inappropriate for his dignity. Samira’s harangues have no effect. Next they find a young woman who might do for the lead: lovely, fresh-faced, smart, the ideal of the country’s new era. But she’s wary of the offer. She’s meant to be married in a month or two. Yes, she’s still in school, but if her fiance comes, she has to come with him. He won’t agree. Again, Samira’s encouragement falls on barren ground.

The problem is that Samira wants the people to tell their own stories. Although she has a broad idea of the storyline, she wants to incorporate the experiences of the people she meets. Yes, she could bring in actors from Iran. But what would be the point of that? Her story is anchored in the ruins of Kabul and Hana’s sensitive, acute eye shows us the full meaning of that. Potholes and crumbling walls and the loss of dignity; women grown too old too soon with worrying; children who have grown up before their time. A country deprived of its sense of itself.

A father with his sick baby and his little boy

If the final film has bleak moments, this documentary is bleaker by far for showing the unmasked desperation of the Afghan people. The film crew pay for a doctor and medicine for a sick baby whose story resonates with them. The father, confused by their motives, has heard people say they plan to kill the baby in the film (spoiler alert: the baby as a character does die, but people are conceptually unable to divorce that from an actual act of infanticide). The father daren’t refuse them the baby, because he so badly needs the money they offer, just begs for them to keep it alive. It’s a haunting vision of a world so very, very different from our own.

Personally I was struck by the women. They grow old so quickly. Agheleh, the lady who eventually takes the lead, is Samira’s age: twenty-two. Samira is young, vibrant, opinionated. Agheleh has a ten-year-old son. Ten! But the film doesn’t show the slightest hint of pity for her or the other young women we meet, who have lived lives very different to Samira’s relatively liberated life in Tehran, and a world away from my own experience. Instead the film shows their strength, their courage and their resilience. Agheleh is not cowed by the storm of Samira’s personality. She faces her calmly, stating her position. She would be interested to take part, but Samira can’t simply swoop in, take people away from their daily lives to film them, and then vanish again. Agheleh has to care for her children. She has a job as a teacher. How can Samira guarantee that her job will still be there after filming ends? Amazingly, we see that the power is entirely in the hands of the cast members and Samira is so determined to tell their stories, to allow them to represent their own experience, that she is willing to make remarkable accommodations.

The Makhmalbafs are a staggeringly accomplished family; indeed, it’d probably be fair to say that they dominate the Iranian film industry. Both parents and all three children are directors and they work as a team on many of their films, helping out as assistant directors and producers even when not calling the shots. Samira’s mother Marziyeh is on hand in this documentary to help persuade, explain and cajole when necessary, while her father Mohsen makes an appearance to draw up a contract. Hana, of course, is a constant though invisible presence, noticeable only in the reactions she causes in others. One man, spotting the camera passing in Hana’s hand, covers his eyes with his hand to avoid looking on the unveiled face of a woman. But the most powerful character in the film is Samira. Her dynamism and energy are astonishing and she enters with vigour into the many animated discussions, arguing with as much gusto as any of her potential cast members. She is a force of nature, matched only by the confident, restrained pride of her future leading lady. When you see Agheleh stand up to Samira, you feel that here’s a relationship which could work well for both.

In fact this, no less than At Five in the Afternoon, is a celebration of women: behind the camera, in the director’s chair, as actor, and as stalwart figures in a community struggling to reconstitute itself. It works perfectly as an adjunct to the main film. Personally I would say that it seems a bit odd to have released it independently, because we are never given a voiceover or context or interviews which explain what we’re seeing. Perhaps it might have worked better if the interviews with Samira, which are included as an extra on At Five in the Afternoon, could have been edited in with Hana’s footage here. But, when viewed in context, this is a raw and illuminating film, which does even more than the finished feature to bring us deep into the heart of post-war Kabul and to see, brutally and honestly, what’s left when the news cameras stop rolling.