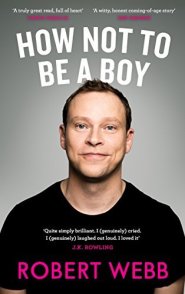 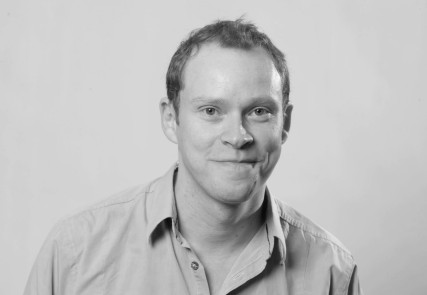 I thought I knew what I was getting with this. The title and cover design channel Caitlin Moran’s How to be a Woman, which left me squirming in scandalised delight several years ago. And, to some extent, I was right; but Webb’s book takes the celebrity-does-gender-studies memoir to new and much darker regions. Written with fearsome honesty, it’s a ruthless exposé of what British society does to its young men, but also a tale of what it’s like to grow up in a world where you simply don’t fit in. It’s a humorous, frank and thought-provoking counterpart to Moran’s book, a welcome view from the other side of the gender barricade, and yet at the same time a completely different beast. Reading this, I feel (to some degree) as my male friends may have felt on reading Moran. Ahead lies terra incognita. And there may be dragons.

Robert Webb grows up in rural Lincolnshire in the shadow of RAF Coningsby and, from a very early age, he knows that he just doesn’t quite fit with what’s expected of boys. He loves his mum, who reads him bedtime stories and with whom he sings silly songs. He likes to be on his own, making up games with his gang of imaginary friends, and as he grows older he finds it hard to get used to hanging out with ‘real’ friends. He tolerates the rough-and-tumble of his two elder brothers for the simple reason that he knows they’ll punch the lights out of anyone who messes with him. And then there’s their dad, who spends more time in the pub than in his own home, and whose unpredictable rages form the pattern of what young Robert grows to see as normal masculinity. And masculinity, as we see time and time again, in a leitmotif throughout the book, is problematic:

When I say that masculinity is something to recover from, I don’t mean that the condition of being male is some innately fallen state. I mean that being male is terrific but comes with a load of extra baggage that is worth noticing. Because you might be carrying a load of stuff you don’t need. Stuff which is getting in your own – and other people’s – way.

Being a boy means that Webb is faced with lots of assumptions. He’s meant to be loud and boisterous and interested in science and maths. Instead he’s cripplingly shy, self-conscious and only really blossoms when cultivated by a sharp-eyed English teacher. And even when Webb wants to do well, he’s hamstrung by the popular notion that boys don’t really knuckle down: a clever girl, he notes with painful accuracy, feels compelled to say how hard she had to work for a good test result; a clever boy typically shrugs it off as a fortuitous accident. You’re not meant to try, as a lad.

Webb’s teens are an endless whirlwind, in which he scrabbles to find purchase. He faces bereavement, batters away at exams like a fly at a window-pane and panics about still being a virgin at fifteen, while equally panicking about the fact that he fancies a couple of boys as well as the expected girls. How is he supposed to process such things when he, like half the population, has been told to just ‘man up’, ‘get a grip’ and not to talk about his feelings? He can’t open up because, even though that might steer him out of his spiral of self-destruction, it’s just not a manly thing to do.

The general tenor of the book is far more sober than I’d expected, although there are moments when Webb becomes gleefully and profanely exuberant (for example: ‘Puberty rushes in like a pyrophobic arsonist, checking petrol bombs in all directions while screaming, ‘What are you doing about the fucking fire!?’). There are plenty of places to make you smile – he’s a comedian after all, and he knows that sometimes the most painful things are best expressed through laughter – but you can feel that there are still deep wounds under the carapace of his writing. Some of the most moving sections of the book are those in which 43-year-old Webb has conversations with his younger self, aged seven or fifteen, deftly weighing up his youthful expectations against what has really happened. And he’s uncompromising. He writes honestly about the impact of his father’s behaviour on his childhood and youth. He’s also extremely frank about his own recent struggles with alcohol and his initial failure to be a good husband, all because he was trying to be a proper man. The cautious implication is that he’s doing better now.

Like Moran, Webb concludes that notions of masculinity and femininity are intrinsically unhelpful, emphasising false differences while obscuring the fact that, as people, we might share many qualities regardless of our gender. Doesn’t it just make much more sense to see ourselves as fellow travellers in the ongoing struggle against the system – which tries to tell men that they’re not allowed to feel, women that they’re not allowed to be as successful or ambitious as men, and makes everyone miserable into the bargain?

I was a sitting target for this book. Like Webb, I suppose I’m a member of the liberal metropolitan elite and, as you know, I’ve previously grown angry about how gender roles are imposed on young children. Reading Webb’s memoir isn’t inspiring in quite the way that Moran’s How To Be A Woman was, because it avoids that kind of zany, call-it-from-the-rooftops swagger; but it lingers with you and leaves you (as a woman) thinking of the men you know, and wondering how oppressed they feel by all of this. Have they struggled with expectations? Have they broken free? Are they open about their feelings? In a way, I find this much harder to evaluate than Moran’s work. I knew exactly where she was coming from, because I’d experienced much of the stuff she wrote about and her book was part of a jubilant widespread movement. Webb’s book still feels deeply personal, daring to ask for understanding at a time when men have often been demonised. It made me think again about Norah Vincent’s Self Made Man.

I’ll conclude with Webb’s own words: a moving section in which he tries to show how desperately futile it is to be constrained by traditional masculinity. At the end of the day, it might be much better and healthier to simply focus on being an awesome person:

Men in trouble are often in trouble precisely because they are trying to Get a Grip and Act Like a Man. We are at risk of suicide because the alternative is to ask for help, something we have been repeatedly told is unmanly. We are in prison because the traditional breadwinning expectations of manhood can’t be met, or the pressure to conform is too great, or the option of violence has been frowned upon but implicitly sanctioned since we were children. We are dependent on booze when we try to tilt the table, try to change the chemistry in a way that is harmful, counter-productive and, of course, widely accepted as tough and manly … We die younger than women because, for one thing, we don’t go to the doctor. We don’t take ourselves too seriously. We don’t want to be thought self-indulgent.

Good grief, chaps. I send you all a heartfelt virtual hug. If any of you read this, come back and tell me what you thought of it. I’d love a man’s eye view of it. Be my mole. Please.