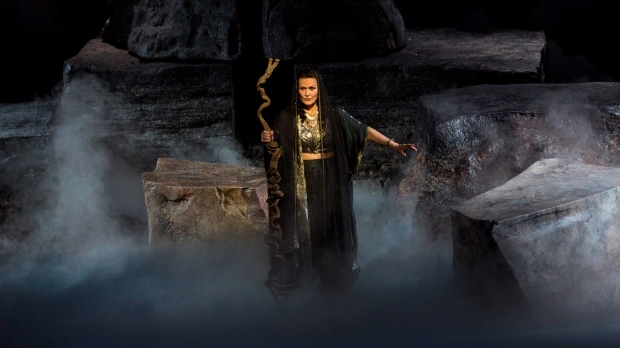 The dauntless Argonauts came to the shores of Colchis in search of the Golden Fleece, but their heroism has been put on hold. For the last year they’ve been kept kicking their heels while their leader, Jason, diverts himself with a mysterious woman. He might be thoroughly enjoying himself but, as his fellow Argonaut Hercules tells him, it’s time to move on. But Jason’s romantic adventures prove harder to shake off than he anticipates, when it transpires that his secret lover is none other than Medea, Queen of Colchis. To make matters worse, his fiancee Hypsipyle, Queen of Lemnos, has grown tired of waiting for him and is coming to fetch him home. Did I mention that Jason has also given each woman twin sons? Amidst the glitz and glitter of Versailles’s Opéra Royal, everything was about to hit the fan in a very, very Baroque fashion.

Based on a libretto by Giacinto Andrea Cicognini, Cavalli’s opera was first performed on 5 January 1649 in Venice. If any regular readers still think that Baroque opera is highbrow, serious stuff, I invite you to listen to Giasone’s first major aria. The eponymous Jason sprawls in a love-fuelled stupor and sings for five minutes about how glorious sex is, but he just can’t manage any more just at the moment and longs only to ‘die’ (ahem) in the lap of his mistress. Naturally, this translated at Versailles into Valer Sabadus lying blindfolded on a rock with his shirt open and his trousers undone. (Remarkably, one of the tamer interpretations.) The things we do for art. 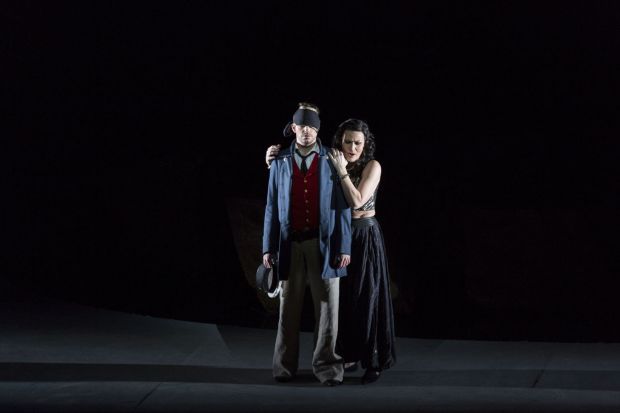 Once Jason (Sabadus) has been recalled to his duty, he goes to solicit the help of Queen Medea (Kristina Hammarström), little realising that he knows her much better than he thinks. For her part, she scolds him for womanising his way around her kingdom, teasingly claims that her elderly maid Delpha (Dominique Visse) is his beloved, and then finally outs herself. Jason, astonished, accepts her offer of magical assistance in his quest for the fleece – for Medea is, of course, a sorceress – and then the two lovers plan to scarper, leaving behind Medea’s elderly husband Aegeus, King of Athens (the father of Theseus, for those whom enjoy keeping their myth-cycles straight). Once Aegeus (Raúl Giménez) hears about his wife’s flight, he decides to follow her – because, despite everything, he actually loves Medea – accompanied by his long-suffering hunchbacked and stuttering servant Demo (Migran Agadzhanyan).

Meanwhile, on the banks of the river Iberus, Hypsipyle (Francesca Aspromonte) pauses with her band of excitable maids and her loyal servant Oreste (Alejandro Meerapfel). Sick with love of Jason, she sends Oreste off to find out the latest news, while her maids – led by the spirited Alinda (Mariana Flores) try to jolly her along. Of course, Oreste returns with the unfortunate news that Jason has impregnated another woman and scarpered with her. (Oreste finds it hard to be entirely sad about this, as he has a long-cherished soft spot for his young mistress.) Just when things look as if they can’t get any more complicated, the gods get involved. Apollo (Francesca Aspromonte) and Cupid (Mary Feminear) have already had a spat in the prologue about whom Jason should marry: Apollo champions Medea, who is his descendant; Cupid has already made plans for Hypsipyle. And so divine meddling brings a great storm, that blows the Argo off-course, Golden Fleece and all, and washes the Argonauts up on the shores of the Iberus. As Jason’s two lovers meet head on, things are about to get messy. 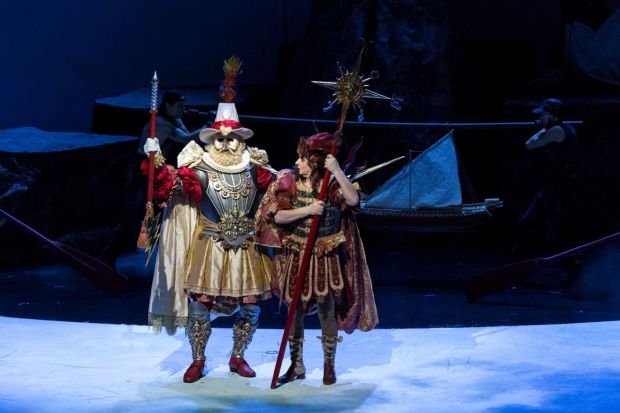 Cavalli’s operas have little time for heroes. His Ercole in Amante shows Hercules as a swaggering, lustful idiot; in Elena, the future king Menelaus spends most of his time in a dress. Giasone is no exception. Jason is a figure of mockery: a man ‘effeminate’ in the Baroque sense of the word, whose manly qualities have been diluted through excessive sex with women. He’s a weak, vacillating, dreamy creature who only lifts a weapon once in the entire opera, and that’s to threaten a woman. When faced with the two women he has dishonoured, in an unholy duo, his reaction is to try to run away. There’s a stark contrast between his weakness of spirit and Medea’s magnificent grandeur. Indeed, she comes out of this as the one moulding the story to her own ends. She is splendid as she calls upon the fiends of hell, wreathed in smoke and wielding a sorcerer’s staff; ferocious as she encounters her rival; she only feels unconvincing at the end, when the laws of opera require her to forgive and make peace. (Her two children by Jason remain unslaughtered here: this is Venetian froth, not Greek tragedy.)

The setting was vaguely 1930s with modern commando uniforms for the Argonauts, while the gods were resplendent in proper Baroque costumes to differentiate their reality from the mess of adultery and cowardice all around them. Huge applause must go to the enterprising Feminear, who as Cupid spent the entire opera in an oversized baby-shaped fat-suit. The set itself was simple but very effective: a great boulder splits open in answer to Medea’s dark command, revealing the glint of the Golden Fleece within, and the final act took place among billboard trees and bushes, as the characters stumbled through the inevitable last-minute confusions. Good use was made of the stage, too, although I tired rather quickly of watching lustful old Delpha despoiling yet more young soldiers. Still, if you have a comedy nurse in Cavalli, she’s always after the young men. 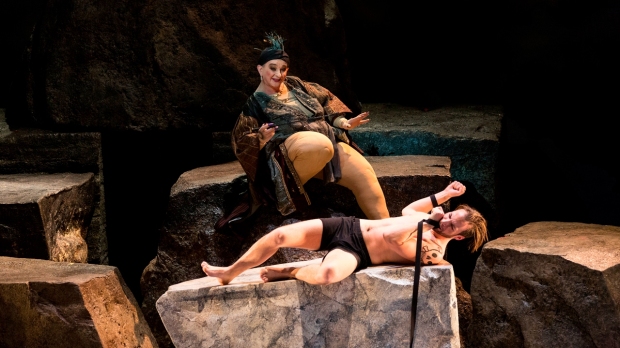 Delpha (Dominique Visse, in fatsuit) approaches one of her victims

Vocally, I thought most of the cast were very good. Hammarström had the best role, as Medea, and she brought power and intensity to her singing. As ever, Cavalli’s women are particularly strong: I feel compelled to note that both Medea and Hypsipyle are queens in their own right. As Medea’s rival, Aspromonte was a loyal innocent, the purity of her voice backing up her character. The third portion of the limelight went to Flores’s Alinda, the classic cheeky maid who sings about how wonderful it is to be able to pick up men and drop them as you please (this Alinda, in a comic touch, was heavily pregnant). Between the three of them, these women kept the stage alight. Perhaps I should mention Dominique Visse’s Delpha here, as an honorary woman. It seems that Visse is now the pantomime dame of Baroque operas: if you need a comedy nurse, he’s your man. I’ve never been a great fan, I admit, and his strength here was very definitely comedy rather than singing, as his voice wavered wildly between (creditable) falsetto and broken chest voice. Of course, much of that may have been deliberate, to underscore the innate comedy of a man playing a woman… and I think part of it is that I just don’t warm to him.

The male singers weren’t quite as strong as the women. It was unfortunate that Giménez sang the whole thing as though it were Puccini, with a pronounced bel canto delivery that feels completely foreign in the context of Cavalli’s more austere music. He has a very good voice, but the style just seemed completely inappropriate. One of the stars was Agadzhanyan as Demo, partly for his exuberant performance, but also for the sheer command he exercised over his lines: singing Baroque opera is difficult enough without having to ‘stutter’ your music, and he did a wonderful job of singing the clown-sidekick role. I was also pleasantly surprised by Meerapfel’s Oreste, who was heartsick without losing his dignity, and who provided a sober rallying point amid Hypsipyle’s fluttering handmaidens. In smaller roles, Günes Gürie (Besso) and Taras Berezhansky (Ercole) were both impressive, but didn’t really have enough chance to shine. 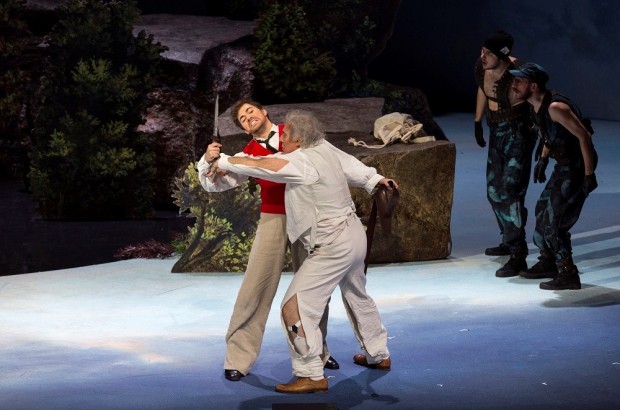 As you’ve probably guessed, I went for Sabadus and enjoyed his performance, noting as ever his great gift for comedy and his willingness to make himself look ridiculous. He doesn’t seem to take himself anywhere near as seriously as many other countertenors do, and that’s refreshing, because he’s quite happy to play the buffoon if that’s what it takes. Here he made a very good job of making a hero unsympathetic, of stripping away the glamour of Jason of Thessaly and letting us see the silly little man beneath. Vocally, however, Sabadus was very slightly off colour when we saw him. I’d spotted something odd in the first half, which I couldn’t identify exactly – my ear knew that it wasn’t perfect but I don’t have the music vocabulary to understand what I was hearing. At the end of the interval, however, a spokesman announced that the changing temperature was making his voice unstable and he begged our indulgence. Funnily enough, he was much, much better in the second half and we had plenty more of his characteristic bell-like long high notes, much to my delight. His Delizie contenti was predictably gorgeous, but I’d like to hear him record it one day when he’s firing on all cylinders.

It’s always great to have an excuse to go to Versailles and spend a few hours in this jewel of an opera house, and it was also wonderful to tick off one more Cavalli opera. In a neat touch, the orchestra were Cappella Mediterranea and the conductor was Leonardo Garcia Alarcón, who were behind the recording of Elena that did so much to get Sabadus established as a leading man back in the day. It must have been rather like a reunion for them all. And that was something that came across: the sheer fun being had by all. Cavalli is not the most musical composer, to my ears (I still think his operas are more like sung dramas than proper opera), but he’s one of the most deliciously silly, dramatic and irreverent. His eye for stories rarely falls flat and this production of Giasone does credit to his playful and tongue-in-cheek score. A great treat. I’ll be eagerly keeping my eye on Versailles’s programming in the seasons to come, hoping we might have some more Baroque to look forward to.

I should say that I agonised about the rating for this. It was so very nearly four stars, but I just felt there were too many issues for me to give it that rating with a clear conscience. So please read this as a high 3.5. A 3.75 if you like…

Find out more about the Opéra Royal 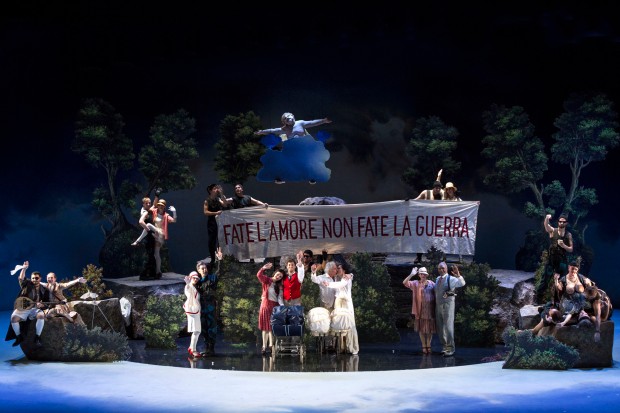 A splendid message to end on: ‘Make Love Not War’ proclaims the tableau at the final curtain