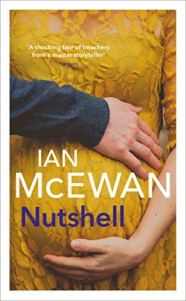 Imagine that you’re privy to a murder plot: a fiendish, heinous plan to kill your father. Imagine that one of the conspirators is your own mother. Even worse, her accomplice is your uncle, your father’s own brother, who has slipped happily between the prematurely-vacated bed-sheets. And imagine, in this horrific scenario, that there’s absolutely nothing you can do but listen as the scheme unfolds along its pernicious course. That’s the fate of our narrator in this brilliant, playful novel, who is rendered powerless by virtue of being a nine-month-old foetus within his mother’s womb. A cross between Hamlet and Look Who’s Talking really shouldn’t work, but this does, triumphantly: it’s one of the most sumptuously-written books I’ve read in ages.

Our narrator’s personal experience might be limited, but that doesn’t mean that he isn’t keen to learn. He listens hungrily to the podcasts, lectures and radio programmes with which his insomniac mother distracts herself, toying with concepts of ‘blue’ and ‘green’ and ‘gold’, and learning about the myriad miseries of the world that awaits beyond the cervix. It isn’t an entirely positive picture, but his worries are reserved mostly for his own family. His parents are estranged, he knows that. His mother has demanded some space in her late pregnancy, banishing his browbeaten father John to digs in Shoreditch while she languishes in the dilapidated rooms of his family home in St John’s Wood. Of course, no sooner has her husband gone than his brother arrives: Claude, slimy and vacuous, intellectually vapid, no equal to his eloquent, romantic brother, whose passion for publishing poets has left him almost penniless.

But Claude, for reasons our narrator can’t conceive, is sexually irresistible to his bored young mother, Trudy. Suffering the indignities of late-pregnancy sex, the narrator grits his teeth and dreams of better days ahead, when he hopes with winning infant ways to reconcile his parents. But what’s this? One night he hears whispers of a plot, of murder, a way to clear the inconvenient John from Trudy’s path and to open the way for her future with Claude. Now all our narrator can do is press his ear against the membranes that formerly marked the boundaries of his world and hope against hope that he can find a way to prevent this injustice ever coming to pass. But it turns out that he has a lot to learn along the way, not just about the world, but about human nature itself.

The real joy of the book is its style. McEwan writes with glorious indulgence: his narrator is without a doubt the most erudite foetus in the history of literature, but balances his intellect with a healthy sense of the ironic. He’s torn between the imminent wonders of the world and the sheer horror of his own imminent existence, torn between physical dependence and moral indignation at his mother’s plotted crime. But what can you do when you’re crammed upside down into someone else’s pelvis without even the room to stretch your legs? Words are his only metier for now, and he revels in them. Even matters of biology are given a rich sheen of eloquence:

Long ago, many weeks ago, my neural grove closed upon itself to become my spine and my many million young neurons, busy as silkworms, spun and wove from their trailing axons the golden, gorgeous fabric of my first idea.

Our monologuing not-yet-infant is wise before his time, yet doomed to be misunderstood and, in that, he fits the pattern of his prototype. For Nutshell takes its title, its theme, its whip-smart, indignant young hero and even some of its phrasing from Hamlet. You’re probably quicker off the mark than me: I was halfway through before I slapped myself on the forehand and exclaimed, “Claude! Trudy! Of course!” The result is something whimsical but dark: the rotten state of Denmark translated to North London; and it’s just wonderful. For all its murderous subject, this is a book which takes its time – digressing into lucid meditations on the world around us, flitting from the refugee crisis to the ‘snowflake’ generation to the finer points of wine (a subject on which our narrator is extraordinarily and unexpectedly knowledgeable). Meticulously crafted, with beautiful language and expert pacing, it’s a real joy.

I haven’t read enough McEwan (apart from his recent Purple Scented Novel short story, which I enjoyed very much and will be coming up in a future Bite Sized Books post): he’s a writer I need to catch up with in due course. But this was a super reminder of his powers as an author. With its tension building as slowly and irresistibly as the onset of labour, it’s a smart and wise book that transforms a tale of wickedness into a wonderful meditation upon the richness of life. Highly recommended.