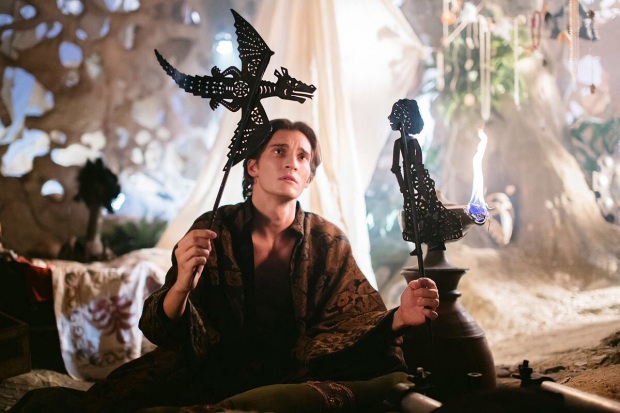 Remember those classic fantasy films of the 1980s and 1990s: Willow; Legend; The Never-Ending Story; or Labyrinth? They managed to combine magic with darkness, appealing to the lively imaginations of children but also hinting at something deeper and more troubling, something that lurked beyond the brink of adolescence and adulthood. After all, these films are adventures but they’re also all coming-of-age stories. And I was reminded of them by this sumptuous Russian fairy-tale, inspired by Beauty and the Beast, which boasts a strong young heroine, an improbably gorgeous hero, and a classic story about learning to know who you really are. If I were ten years old, I’d have absolutely adored it, and even now I thought it was rather lovely. If you’re looking for a way to distract children (or yourself) on a dark, wet afternoon, and if subtitles don’t hold any fear for you, you could do a lot worse than turn to this little gem.

Once upon a time, the people of a Russian dukedom lived in fear of the darkness that came down out of the sky on leathery wings. To appease it, they offered up their most precious possessions: their nubile daughters, dressed in wedding garments and loosed upon the lake in boats. They sang the summoning song and darkness would come, in cloud and flame, and snatch one of the girls up and away, never to be seen again. Her sacrifice kept the others safe. But those were old times. Since the Dragon Slayer went forth many years before and (predictably) slew the dragon, the offering up of a girl in a boat on her wedding day has become nothing but a charming old custom. 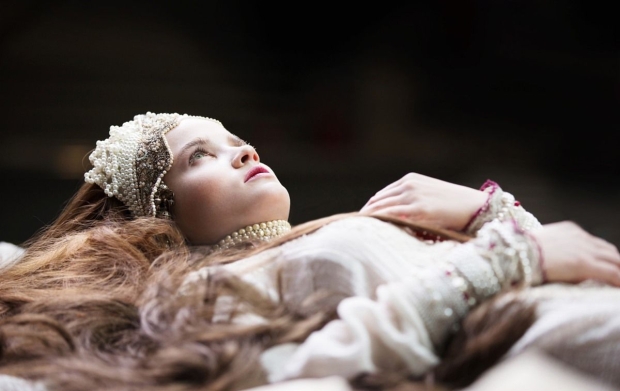 And, when the Duke’s youngest daughter Miroslava, or Mira (Mariya Poezzhaeva) goes out to marry the grandson of the Dragon Slayer, she expects it to be just that: a quaint old ritual. But Igor, her Vikingesque husband-to-be (Pyotr Romanov) is proud of his heritage. As she glides out onto the lake in her boat, his men sing the old summoning song while he struts and preens on the pier, aping his grandfather. Suddenly darkness clouds the sky, sharp claws snatch Mira away… and, when she wakes, she finds herself trapped in an island prison. Perhaps dragons haven’t been wiped out after all…

Mira is resourceful and not the kind of girl to sit around waiting to be rescued, so she starts trying to escape. But her attempts seem doomed to failure. Then she hears something unexpected – a human voice – and sees a face through a chink in the wall: a young man (Matvey Lykov), who seems to be just as much a prisoner as she is. She christens him Arman and hopes they can find a way to escape, but before long she realises that Arman is trapped by a fate far more terrible than hers. (Spoiler: there’s a clue in the title.) Yet, as time passes, these two isolated young people cautiously become friends, while they wait for Mira’s betrothed Igor to come and rescue her. Mira decides to teach Arman how to live in a more civilised fashion and Arman realises that his humanity is being strengthened by her faith in him. She even believes that he might be capable of overcoming his curse. But is it possible to deny half of yourself? And then there’s the big question. Does Mira really want Igor to ‘save’ her from this new world?

Mira (Mariya Poezzhaeva) and Arman (Matvey Lykov) engage in some spring cleaning. For reasons never explained, Arman has access to trousers but no shirts

There are many ways you could be cynical about this if you chose, but that’s not the point! You could observe that Arman is unbelievably buff for someone who doesn’t get any exercise (having spent his life either wandering around the island or hiding in a crevice during the more fiery moments of his existence). You could smirk at the fact that Mira’s touch turns Arman’s veins to fire and risks tipping him over into dragon-form (a not-so-subtle allusion to animal desire). You could raise a appreciative eyebrow at the fact that Arman’s clothes burn off whenever he turns into a dragon; though there’s nothing to scare the horses: this is resolutely a PG film. And you could sigh at the kitsch slow-motion scenes of pretty young things frolicking in surf and running around the island.

But none of this really matters if you decide to take it all with a pinch of salt, as you would any other fantasy film of its type. (I snorted out loud when one Amazon review decried it as ‘unbelievable’.) At heart, it’s sincere and charming, and its two young protagonists do a great job of shouldering something which is essentially a two-hander. And did I mention that it looks incredible? The medieval Russian costumes and setting are mouth-wateringly beautiful and, in terms of natural beauty, I must give a special mention to Lykov’s cheekbones, which held me spellbound for entire scenes.

So if you fancy some Slavic fantasy to complement Deathless, Uprooted or The Bear and the Nightingale, or to offer a more innocent counterpart to Tale of Tales, give this a go. I’ve rated it in comparison to other films of its genre so, while I’m not saying that it’s up there with Casablanca, it’d be well worth your time if you like a bit of fairy-tale escapism. And it’s free if you stream it with Amazon Prime, so you really have nothing to lose. Channel your inner child, shrug off your cynicism and prepare to be enchanted…