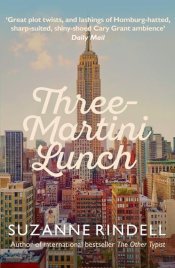 It’s 1958 in New York and change is in the air. In the shabby streets of Greenwich Village, hipsters listen to jazz, argue about politics, experiment with performance art and dream of changing the world. Into this feverish place come three young people, seeking lives that’ll allow them to become their true inner selves. Privileged Cliff Nelson is running away from a life of upper-class bourgeoisie, confident of astonishing the world with the brilliant novels he’ll produce. Eden Katz comes east from Indiana, dreaming of being an editor in a publishing industry which has little place for women. And Miles Tillman tries to find a world that accepts all his facets, as a young black man from Harlem with a top-flight education and a passion for words. By the end of the story, these three young lives will have intertwined in a compelling story of love, ambition, tragedy and betrayal.

This novel is a spiritual sibling of Rona Jaffe’s The Best of Everything and Amor Towles’s Rules of Civility: it shares those books’ hardscrabble protagonists, their pitch-perfect narrative voices, and their sense of aching cool. As far as I can tell, not having been around in 1950s Manhattan, Rindell has captured the sense of excitement and hope and grit and gloss and pretension that invigorated the city. She also creates very well-rounded characters, not only in her three narrators (Cliff is now top of my list of viewpoint characters whom I love to loathe; he’s just so absolutely ghastly in practically every way, and so horrifically real), but also in the supporting cast who mill around them – friends, hangers-on, lovers and parasites.

Greenwich Village acts as the magnet which brings our three together and thereafter as the glue which keeps them running into each other. As Eden struggles to make her mark in the typing pool of a publishing house, she crosses paths with the energetic Swish, who lures her down into the Village. Here she finds excitement in the experimentation and freedom in evidence all around her, and comes to know Swish’s other friends: the genial Pal, the handsome Bobby and the self-proclaimed intellectual Cliff. Miles, whose job as a messenger boy helps to underwrite his Columbia education, finds himself drifting downtown too. In the Village, it no longer matters that Miles is an educated black man, neither fish nor fowl, unable to gel with his alienated family or with his prejudiced classmates. Here he can absorb an atmosphere which promises to allow all kinds of dialogue and self-expression. Ultimately, however, both Miles and Eden find that even in the Village one must sometimes make sacrifices to become one’s true self.

This feels more like a character piece than a plot-driven novel, although the latter part is built around the fate of a brilliant manuscript. Rindell gives us time to get to know her protagonists, even if, in Cliff’s case, that’s sometimes a mitigated pleasure; but it means that the book spills out a way beyond Manhattan itself, to the homely streets of Harlem and the country-clubs in Connecticut and even further, to San Francisco on the brink of the hippy age. I think I found it so gripping because I really believed in the time and place that Rindell was writing about, to the point that I could smell the pipe smoke in the dark restaurants where editors broker their deals over lunch, or hear the jazz wailing in low-lit basements. It’s a story about being young and having dreams, but it’s also a story about growing up and the disappointments that come with getting older: the realisation that our parents have secrets and compromises in their pasts, and the even grimmer realisation that we may well have to tot up some of our own in order to survive. While it isn’t a completely uplifting book – it has a bittersweet tang to it – it feels rich with life.

It was a good book with which to begin 2019. As usual, I won’t be taking part in any official reading projects, but I would like to try to read more widely this year. You have my full permission to come back and laugh at these lofty ideals later on, of course, when my reading diet turns out to have featured more Georgette Heyer than anything else… But I’d love to read and reread more art history, and other books that push me to stretch my mind, such as works on politics, economics, philosophy, paleoanthropology and science. I’ve even had a recent splurge on Penguin Classics for my Kindle, so I have vague ambitions to read at least a bit of classical history: Tacitus, Livy, Polybius and Suetonius are all up for grabs, not to mention philosophical works by Aristotle, Plato and Seneca. The classics are one area with which I’ve never been as familiar as I’d have liked – and by that I actually mean not only texts from antiquity, but also authors like Dickens, Hardy, Trollope, Gaskell and the Brontës. I’m keen to keep reading books from other cultures, and suspect this year might feature quite a few Russian novels and histories, as I spent a week in St Petersburg just before Christmas and was captivated.

So there are my vague hopes – not promises, but good intentions. Of course there’ll be the usual mix of historical fiction, fantasy and contemporary fiction as well. Wishing all of you a very happy and successful 2019 and, should you desire a book that’ll fit well with the toasts and ambitions of the New Year, Three-Martini Lunch might well fit the bill.