Stories are dangerous things. As they flow through the world, they cut their paths into the fabric of reality, each time strengthening its shape. As time passes, it becomes harder and harder for a new story to diverge from the old one. In time, every seventh son of a seventh son will become a hero, and every put-upon stepdaughter will be blessed with a fairy godmother. But surely that’s all right? Fairy godmothers are always good, aren’t they? They make sure the story ends as it’s supposed to. But who says what the end should be? Someone in the exotic city of Genua is twisting reality to make it suit the stories, and the three witches of Lancre aren’t having any of that. Despite their fear of ‘forn parts’, they ride out to put things right.

Technically, it’s Magrat Garlick who should be putting things right. She’s the one who was gifted with the fairy godmother’s magic wand, after all. It’s not her fault that she hasn’t yet figured out how to turn things into anything but pumpkins. She’s the one who has to go to Genua to stop the servant girl marrying the handsome prince. And yet, despite her best efforts, she’s being accompanied by Granny Weatherwax – who disapproves of everything more than half a day’s walk from her cottage, and especially disapproves of fairy godmothers – and Nanny Ogg – who brings her unfailing cheer, her conviction that she can speak any foreign language you care to name, and her villainous cat Greebo. The Discworld isn’t going to know what’s hit it.

In Genua, as the witches approach, something is bubbling under the surface. In the swamp, the voodoo-witch Mrs Gogol brews her gumbo and waits for the moment to strike. In the castle, the newly-installed Duc lounges around with his smoked-glass spectacles, his limp wet handshake and a lingering taste for flies. And his adviser, the powerful witch Lily, waits to accomplish her greatest triumph in bringing him together with the servant-girl Embers. Lily’s gift comes from the power of mirrors, reflecting her gaze far out across the Discworld, and so she knows earlier than anyone else who is coming to fight her. Let’s just say, it’s time for a family reunion.

I always enjoy the three witches, who have such wonderfully complementary characters and whose conversations fizz with authenticity. Nanny Ogg is a particular favourite – I’m sure we all know someone like her – and I was pleased to see brief reappearances of the Hedgehog Song and A Wizard’s Staff Has A Knob On The End. Magrat is, as ever, gently misguided and has given up some of her earth-motherliness in favour of the martial arts of the mystic east (having decided quite firmly that marrying the king, as seemed to be an option at the end of Wyrd Sisters, isn’t her thing). And Granny Weatherwax is, as ever, far sharper than anyone around her and powerful in a vast elemental way that goes quite beyond the capabilities of her two coven-mates.

But this book isn’t just a delight for the main faces. There’s a strong cast of secondary characters, of whom the two most striking must be the dwarf Casanunda (the Disc’s greatest liar and second-greatest lover), for whom a stepladder is never far away; and, of course, Greebo. Greebo in human form is just a sheer delight – Pratchett has a ball with imagining how this scarred tomcat would translate to man-form:

As a human, his nose was broken and a black patch covered his bad eye. But the other one glittered like the sins of angels, and his smile was the downfall of saints. Female ones, anyway. Perhaps it was pheromones, or the way his muscles rippled under his black leather shirt. Greebo broadcast a kind of greasy diabolic sexuality in the megawatt range. Just looking at him was enough to set dark wings fluttering in the crimson night. …
Nanny fanned herself with her hat.
‘Whoo-eee,’ she said. ‘And to think I used to tickle his tummy… No wonder all the lady cats scream at night.’

Makes me laugh every single time. Fortunately I know this isn’t the last time we’ll see Greebo in his two-legged form, so I’ll be looking forward to Masquerade. But as you can see, this is vintage Pratchett: a closely-focused story, cheerfully undermining traditional themes, with just the right number of cameos and allusions to spice the story, which barrels along at a fine pace and climaxes with a grand ball at the castle. But will the witches succeed in their efforts to break the spell before the chime of midnight?

Silly, glorious fun, this is one of the best books in the series so far.

And of course, the traditional drawings by Paul Kidby. I am especially fond, naturally, of his images of Greebo, whom he’s got spot-on. 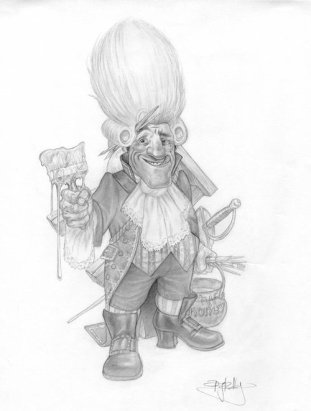