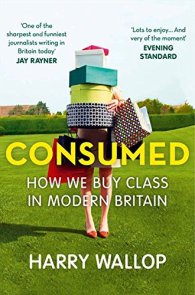 How We Buy Class in Modern Britain

Harry Wallop is well-placed to write about class. The cousin of the Earl of Portsmouth, he went to private school, learned from a young age how to tip a gamekeeper, and went on holidays with his nanny until his parents felt he was old enough to appreciate travelling abroad. But in recent years he has moved away from the world in which he grew up: he now lives in Islington and works as a journalist and television presenter (which is essentially just a different kind of social elite). Class is something that, we’ve been told, many times, is no longer relevant in the modern world, but anyone who lives in Britain knows this isn’t true. In this book, Wallop argues (and I agree) that the great post-war age of social mobility is over. Class is becoming more entrenched and more subtle than ever. He describes the new social tribes of modern Britain, and how they are defined not so much by birth but by lifestyle and consumer choices. It’s a lively and engaging book – albeit full of sweeping generalisations (but that’s the point of any work of classification) – and extremely British. The shades of nuance described here will be difficult for foreigners to pick up, and rightly so (you would be forgiven for exclaiming, on numerous occasions, “But why is that even a thing?!”), but I imagine that native Brits will feel shimmers of recognition. You might come to Wallop’s book for an accessible discussion of how class continues to shape modern society – but you stay because you want to find out which of his categories you fit into. Reading this book is, in itself, an act of class anxiety.

Recently, we’ve been watching Downton Abbey. Neither of us saw much of it when it first came out and we’ve been enjoyably diverted by its stories of a simpler age, where snobbishness helped to reinforce the rigid hierarchies of a still-feudal world. We’ve seen the difficulties faced by those who dared to cross class barriers – Tom Branson, for example – and the way that snobbishness didn’t just exist at the top of the tree. The social hierarchy was guarded just as zealously by those who headed groups of lower social status: Carson, for example, is every bit as much a snob as the Dowager Lady Grantham. Wallop actually devotes a page or so to Downton in his book (although he suggests that people from the group with which I identify watch it ‘ironically’. We don’t. We genuinely enjoy it). If Wallop had written his book today, he’d doubtless have mentioned The Crown as well. Part of the appeal of these programmes, of course, is that they show us a world in which everyone ‘knew their place’.

Wallop’s book shows us how this world began to change with the revolutionary policies of the 1950s, which removed some of the barriers to social mobility and, crucially, meant that even those in modest circumstances could enjoy a higher quality of life. The rise of grammar schools opened up university to those whose families had never considered it before (my dad and my mum’s brother were both the first in their families to go to university; both were grammar-school boys). The introduction of labour-saving devices freed up time for housewives, who might then choose to get jobs of their own and contribute to the household income. And the introduction of hire-purchase meant that people could aspire to own expensive objects – a car; a television; a washing machine – while paying off a small amount of the cost every month. All these things helped previously working-class people enjoy larger amounts of free time and more disposable income. And that income, in turn, was spent on more consumer goods, holidays, and all the trappings of modern life – making them, essentially, middle-class. That trend has continued, and most people nowadays describe themselves in surveys as middle-class. But that obscures the fact that there are many different levels and lifestyles within this sprawling self-diagnosed middle-class – and Wallop sets out to examine them.

Consumed is divided into thematic sections, looking at how modern class is expressed, or judged, according to choices about food, holidays, clothes, home, leisure and education. Wallop has created several broad groups which he uses to show class differences in these areas, and which are supposed to be generic: identifying with one of the groups, as we found, doesn’t mean that you have to agree with absolutely everything about it. I can imagine that some reviewers might take offence at Wallop’s categorisations, on the basis that any kind of classification is discriminatory – but I suspect these people also claim that class no longer exists (and that they are race-blind, probably). Such people mean well, but you can’t shake off the feeling that they operate in a cosy, comfortable and (ironically) rather well-off bubble, with good state schools nearby and a Waitrose round the corner. So come along and try to figure out how you fit in. It isn’t scientific, but it’s good fun. Are you a Sun Skittler? A Rockabilly or a Wood Burning Stover? An Asda Mum, a Portland Privateer or a Hypen-Leigh? Wallop identifies virtues, and flaws, for all of them.

I pretty rapidly realised that I’m a Wood Burning Stover, or at least an aspirant. (My ambitions for my lifestyle run beyond the possibilities of my pay packet, but I guess that’s what I get for choosing to become a museum curator rather than following my original teenage plan to go into the law.) We have way too many books; when we go on holiday it’s usually a city break with museums and galleries; we don’t have an ice-cream maker but we do have a bread-maker and a food processor; we have a cafetiere (though that’s my partner’s: when I drink coffee at home, it’s usually granules, something of which I always feel obscurely ashamed when I have to admit it in public). I tend to gravitate towards the Guardian (he despairs of me, and reads the Spectator); and we have days out at National Trust houses and gardens. I went to Oxford; he went to private school. I own my tiny flat, which is entirely thanks to help from my parents. It’s always ‘pudding’, unless we’re in a restaurant or eating an extra course of fruit, chocolates, port and Tokaij, in which case ‘dessert’ is just about acceptable. We tick many of the required boxes (although we don’t have a wood-burning stove). It’s amusing to discover that my tastes are so obviously shaped by my notions of the class I want to join – but at the same time it’s rather comforting to know that I fit in somewhere. That’s surely part of the reason class persists here: we have such a desire to belong.

As with any book purporting to explain the modern world, Wallop’s is a little dated. The world isn’t the same as it was in 2014. It’s harder than ever for people of my generation and below to get on the property ladder, and so class markers are shifting, becoming more about the supermarket (or online delivery service) that you use, the place you get your coffee (instant granules from a jar; Costa; Pret; Monmouth Coffee?), the newspaper you read (Sun; Daily Mail; Guardian; Telegraph?) or the place you buy your bread (Iceland, Sainsbury’s, Gail’s, or Borough Market?). We’re probably never going to shake off class, at least in Britain, but its meaning and markers will continue to shift as more and more people come to consider themselves middle class, and need a way to classify themselves within that amorphous mass. Yes, Wallop’s book may be a little snobbish, but to his credit he satirises each class equally and he has at least tried to talk to real people along the way, even if he seems to have lighted on only one or two spokesmen for each ‘group’.

There’s one deep irony to this book. I would strongly suspect that anyone reading it is a Wood Burning Stover. Wallop himself says that this is the main group that places a premium on reading; it’s also the group that’s most likely to have liberal anxieties and a sense of social uncertainty, for all the blasé comfort they try to project on the surface… Amusing, frank and relatable, this book isn’t going to usher in any great revelations, but it’ll appeal to anyone who has spent time fretting over what their clothes / house / dinner party menu / lunch / choice of date venue / holiday ‘says about them’.