I’d been itching to see this production of Poppea for some time, ever since stumbling across some clips of Tim Mead’s E pur io torno on YouTube. The clips showed a bare, stripped-back set and a very striking use of colour, and the cast list looked promising. So on Saturday night, after a rather draining couple of days, I settled down to lose myself in one of my favourite operas. As you’ll be able to deduce from the rating, it wasn’t quite the treat it was meant to be.

The story must be pretty familiar by now. Our cast of characters are the emperor Nero (Nerone); his mistress Poppea, hoping to claw her way into power; the snubbed, desperate empress Ottavia; Nerone’s former tutor, the grim stoic Seneca, too pompous to realise that his time of influence is gone; Poppea’s old flame Ottone, lingering at her house and making a nuisance of himself; the pretty lady-in-waiting Drusilla, who hopes to salve Ottone’s broken heart… and a small crowd of servants, retainers and hangers-on. This is the third Poppea that I’ve written about (the others here and here), so if you’d like a plot synopsis, take a quick look at those.

Despite the glamour of the cast list, the singing is mixed. It isn’t helped by a slightly odd, hollow sound across the board, which made voices sound sharper and shriller than they should be. Mead was one of the pleasantest surprises. He makes a fine Ottone, probably the best I’ve seen; but I knew that already from his turn in the Cencic version (which I haven’t written about yet). In both cases, Mead gives the character an edge which makes him less of a languishing whimperer. Here, in natty suit and close-trimmed beard, he looks like the kind of slightly hipsterish young guy who might work at a think tank. You can understand why Poppea might have decided to amuse herself with him. Crisp, clear and strong, his singing helps to give the character unusual clout.

Poppea herself, sung by Birgitte Christensen, doesn’t have the smoky, predatory air brought to the role by Danielle de Niese or (especially) Sonya Yoncheva. She comes across as humbler: a full-figured, bored, stay-at-home wife, perhaps, who can’t quite believe her luck at having won the attentions of the emperor. Once she has her claws in, she’s determined to do all that she can to haul herself up onto the throne – this Poppea, certainly, has one eye firmly on the crown and won’t blanch at anything she has to do to get there. Christensen has a perfectly strong, attractive voice but, as I’ve said, it doesn’t have that seductive richness that I’ve admired so much in other interpretations of the role. Nor did the production allow her to develop anything approaching a psychological basis for the character: the camera is only interested in certain of Poppea’s assets, none of which were between her ears.

Apart from Mead, I found most to enjoy in the smaller parts. Giovanni Battista Parodi was a particular delight as a schoolmasterly, sternly attractive Seneca, with the kind of rich, agile bass that I always enjoy. Although I usually find Seneca a bit of an old prig, Parodi’s gentleness and world-weariness made him the most sympathetic character in this production. I was amused by the appearance of a young Emiliano Gonzalez-Toro as Arnalta, a role he would reprise a couple of years later in the Cencic version; but here already with that wonderful comic timing that made him such a joy to watch in Elena. And Patricia Bardon, of course, won my admiration for her Ottavia: a dignified, truly Italianate empress, given life by that low, gorgeous voice. Initially I’d been quite excited to see that Magnus Staveland was singing Lucano, but unfortunately his performance didn’t have quite the same panache as his wonderful Polifonte: it came across as a throwaway role, a temporary foil to Nerone.

Naturally I’d been interested to see Jacek Laszczkowski singing Nerone. Although I think of him as one of the ‘old guard’, along with Rene Jacobs and Dominique Visse, he’s younger than them and (as this production shows) was singing leading roles at around the time the current crop of countertenors (whom I think of as the ‘young Turks’) were cutting their teeth. Indeed, Laszczkowski sings Cesare on the 2001 Vivaldi Catone in Utica recording where a very young Jaroussky sings Arbace; and their voices have much in common, both pitched at the higher end of the scale; although Laszczkowski hits some notes in this Poppea that would probably make even Valer Sabadus’s eyes water.

But the simple fact is that, whereas Laszczkowski had a good voice in 2001, this 2010 recording shows that his lower range had become breathy and precarious, though he could still hit the high notes. I also really didn’t like his characterisation. This Nerone is vicious and psychopathic, permanently teetering on the edge of what seems to be giggling, drugged-up neurosis – even his act of grace towards Ottone at the end is a spiteful joke. I’m not saying that I want the emperor Nero to be sympathetic, but I’d like him to be slightly more interesting than this.

At root, the thing I really didn’t like was the production itself. It’s self-consciously stylish and modern – yes, it looks great – but style has been achieved at the expense of any kind of warmth or engagement. The set is a steeply sloped inverted arch, austere and hard, down which characters teeter and blood flows in sluggish rivulets. There is a music-video quality to the whole thing: freeze-frames, repeated frames, and Latino-accented jazz over the credits and occasionally between scenes. I’ve no idea how colourful the show was for those sitting in the steeply-raked seats of the Norwegian National Opera, but the film has been drained of colour, desaturated to the point that there are only vague flushes of blues and greens at certain moments, with only the red tones left to offer the stark painted-on sensation of red lips and more blood. There’s a lot of blood. Most of it is CGI, as you can tell from the moments when characters brandish blood-stained hands, the computerised paint struggling to keep up and leaving them momentarily with white, clean palms.

There’s also a lot of vulgarity. Once again I find myself taking on my ‘maiden aunt of Tunbridge Wells’ persona, but I disliked this much more than I did the Dusseldorf Xerxes. There it was the expression of a tumultuous, gleeful, over-the-top farce. Here it felt cold and calculated, intended to shock and always taken just that bit too far. Ottavia’s elderly Nutrice (Tone Kruse) advises her to take a lover while brandishing cucumbers from her shopping basket. That had a kind of half-amusing inevitability about it; but for her to start galloping around the stage with the cucumber between her legs felt a bit much.

Nerone begins his argument with Seneca from behind the back of the curved stage, visible from the waist up, while someone unseen (it’s implied) is on their knees in front of him. In the opening ‘farewell’ scene, Poppea lies back on the stage and spreads her legs to Nero, hitching up her skirt to show him what he’s leaving. Lucano kicks off the singing contest by sticking his hand down the trousers of Seneca’s corpse, before he and Nerone roll glorying in the sheets of blood spilling down the stage. And yet, bizarrely, the moments which actually work best with an erotic charge fell flat. The singing contest feels like grotesque mockery rather than the sexy, unsettling power-play I’ve seen in other productions (which, I agree, is a perfectly legitimate reading of the scene even if here it became positively nasty).

But the greatest disappointment of all was reserved for the end: Pur ti miro, stripped of all its aching sweetness. I’m not missing the point. I can entirely see that Tandberg’s concept seeks to rip away that strangely feel-good ending and to emphasise the lesson at the heart of the libretto: these people are absolutely amoral. They’re reprehensible murderers, vicious, ambitious, social-climbing monsters. Why the hell should we feel any sympathy for them? Let them sing their duet while all their court lies dead around them and Poppea’s sumptuous dress gradually soaks up blood from the pool in which they stand.

But it doesn’t work for me. It never gives us a way in – this production never allows us, as others do, to make that momentary slip of cheering on the central characters. It never lets us forget how terrible they are and, although Tandberg is going for the Scandi-crime angle and the brutal, superficial shock of blood and lust, it completely lacks the emotional complexity that makes the traditional productions so engaging and also so troubling. Watching horrible, irredeemable people frolic around in blood for three hours doesn’t leave me thinking, ‘Wow! That was a searing, contemporary, relevant production!’ It just leaves me feeling that I should go and scrub my skin on the inside.

Cold, bleak and occasionally downright unpleasant, this managed the remarkable feat of taking a nuanced, sophisticated story and stripping it back to bleached bone and blood, motivated solely by sex. Certainly, this may be a Poppea for our desensitised, cynical, self-centred era but, if so, that doesn’t say much about our era. There will be people out there who liked it very much, and who will condemn me for my fusty old-fashioned views and for lacking the imagination to appreciate this radical, irreverent treatment of the text. But don’t get me wrong. I can see perfectly well what they were trying to do, and some things (such as Ottone’s fate) had a dramatic flair which I admired. Even the unpleasant ideas had more rationale behind them than sharks or flying fish in other productions. But it simply didn’t draw me in. More than that, I actively disliked it, more than any production I’ve seen for quite some time, and I have no desire ever to watch it again.

I just hope the Vienna production in just under a month’s time is more to my taste. 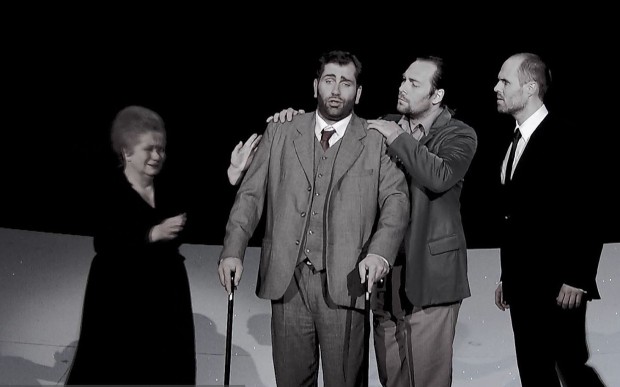