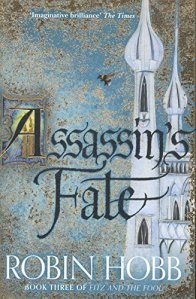 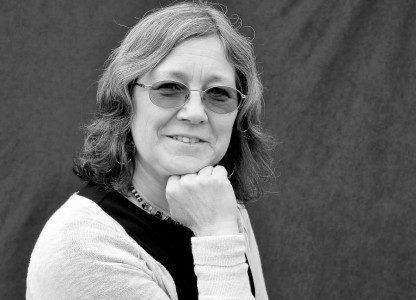 My relationship with this final trilogy of the Farseer series hasn’t always been a happy one and this concluding book continued in much the same vein. I’ve been reading it on and off since May and have only now spurred myself to go back to the beginning and read the whole thing cover to cover. It’s an ambitious novel which synthesises storylines from all three of Hobb’s different series set within this world, meaning we encounter many familiar faces and old friends, as they join forces for the final showdown. There is much to enjoy in its action, but I couldn’t help feeling – as I’ve felt through this trilogy – that the tale sacrifices the emotional intensity of the earlier books. A warning now, before we begin. This post contains spoilers for the Farseer, Liveship Traders and Tawny Man trilogies, as well as for the Rain Wild Chronicles and the earlier books in this trilogy.

The actual plot can be summarised fairly briefly. We rejoin our characters much where we left them. Little Bee Farseer and her captors, led by the wicked Dwalia, have stumbled out of a Skill pillar into the midst of a deserted ruined city, where they try to get their bearings for the onward journey towards the White stronghold of Clerres. Despite the advice of her Wolf Father within her head, Bee has nowhere to run and can only struggle to protect herself from Dwalia’s vindictive cruelty and from the suffocating, untrustworthy concern of the Skill-weaver Vindeliar. Their forces are decimated and those who remain are demoralised, injured and embittered, but Dwalia pushes them ever onward, seeking to find the Path – hard though it may be, brutal, and drenched in blood – which will carry them back to Clerres for her to present Bee as her prize.

Many miles away, in the new city of Kelsingra, Fitz has pushed himself to his limits by using Skill to heal some of the deformed Rain Wilders and, by doing so, has earned the suspicion of the Elderling general Rapskal. Careful negotiations ease the mutual wariness and, before long, Fitz, with Amber and their youthful followers Spark, Per and Lant, have had passage arranged to Trehaug on the barge Tarman. From there, they will transfer to the liveship Paragon for their journey to Clerres. A simple plan, but their meeting with Paragon and with his captains Althea Vestrit and Brashen Trell will shift the future into a new path and forever change the nature of human interaction with dragons.

Thus, the plot. I want to spend a few paragraphs now talking about what worked for me and what didn’t work so well. There will be spoilers for this book, so steer clear if you haven’t read it yet. I did admire the way that Hobb brought together so many different storylines into a complex but convincing whole, sometimes drawing on motifs from long ago in the Liveship books and giving a much more seamless picture of her rich world. At times, though, this feels like a bit of a farewell tour. We travel through virtually all the main locations of her other books and revisit a large catalogue of her characters, until we almost share Fitz’s bewilderment at being surrounded by so many people. Poor Fitz, who has set out to undertake an assassination and finds himself instead caught up in something that feels more like a war! Some of the meetings work well – I particularly enjoyed Fitz’s first sight of Paragon, for obvious reasons, although in that case I felt a bit cheated because Amber never really did explain her actions in any great detail. But Fitz’s uneasy interaction with the figurehead was done very well, as Hobb feeds us ever greater hints about the links between the Skill, Silver and dragon memories.

The divided narrative has always been a problem for me and it didn’t stop here. I know that many other readers don’t mind it or have got over it, but for me this should be Fitz’s story and his alone, and I have never been reconciled to Bee. Admittedly her narration was of greater importance here, as it gave us an inside view of Clerres, introduced us to the domineering Four, and allowed us to witness her own growing sense of her potential. But there were times when I felt as if I were losing Fitz, even before the end.

And I was especially sad that we didn’t get to spend those final chapters entirely with him. After spending nine books in this man’s company, I wanted to have the privacy to see the end through his eyes and, especially, to see that last moment, that coming together which happened exactly as I would have wished, and yet had none of the august emotional power of the end of Fool’s Fate, for example. This was one scene I didn’t want to see through Bee’s eyes, because it was such an intimate moment. The only rationalisation I could make to myself is that Fitz’s whole story is meant to be a narrative written down and that closing moment could never have been communicated to anyone else. But I still feel robbed of it. I wept, a little, but only because I was trying to shut out all the other voices in the scene to focus on what really mattered.

I said of the earlier books that I didn’t recognise this Fitz as the man I got to know so well in the earlier books. That continued, to some extent, although once the action ramped up it didn’t bother me so much. What did worry me was that his relationship with the Fool seemed much more tenuous and distant here: as the Fool works mostly from within the persona of Amber, Fitz feels isolated and wary, kept at arm’s length by this person he doesn’t know and doesn’t even like. Indeed, in those final scenes, until the very end, I was shocked at how little contact they had with each other, considering everything that has passed before; and again I felt cheated that the Fool’s final act was suggested to him by Bee, rather than the obvious result of his own feelings. I know I’m being overly precious. But I love these characters and spent six books feeling them real and alive, and I felt here that they were being directed by the needs of a plot rather than directing themselves.

As a book, it was sprawling and certainly full of incident and action; as a conclusion to the whole series, it gave me exactly the ending that I hoped for. But the means by which we came to that ending have left me feeling troubled and unsatisfied. I am glad I’ve read this final trilogy, though I haven’t had all the answers that I imagined we might have been given. But I don’t think I’m going to read them again. For me, I think I’m going to stop my future rereads at the end of the Tawny Man, with the comfort that comes from knowing there is another ending somewhere down the line. I’m so sorry I couldn’t love this trilogy more. And I know I can hardly grumble about characters not being ‘right’ when the author herself tells me that this is who they are and what they do. But in this final series, it all became so much more about dragons than it really did about Fitz, who is the emotional heart of this series for me.

I should probably have waited before trying to write this. I’m not feeling terribly ordered at the moment and I fear it shows. I feel sad, unfulfilled and a little bit empty. And yet don’t be put off too much by what I say. Most of the reviews I’ve seen have been glowing and, objectively, it’s a good book. I simply have a strong personal connection with these characters, or with my interpretation of them, and I miss them already. Deeply.

Last in the series – Fool’s Quest